Wearable Technology and Its Impact on Internet Marketing

Is your brand ready to leverage the boom of wearable technology?

Wearable technology is already impacting the future of Internet marketing and thus, advertisers are investing resources to stay ahead of the curve.

In this article, you’ll learn everything you need to know about wearable technology and how you, as a marketer, can leverage these advancements to grow your business. 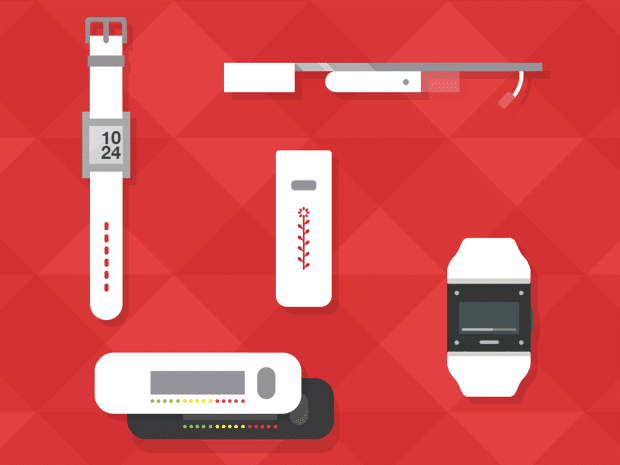 What Is Wearable Technology?

Often, these items interact with user smartphones to give real-time fitness information, easier access to apps, and message notifications. Gadgets falling under the wearables umbrella range from Bluetooth earpieces to smartwatches, headphones, and calorie-counting wristbands.

The trending companies and most established brands in wearable tech center around the health and fitness industry. Jawbone and Fitbit — armed with their diet and exercise-tracking wristbands — lead the pack in this niche. Fitbit alone made up more than 60 percent of this market in 2014, according to Business Insider.

Smartwatches are also in on the act with Kickstarter’s famous brand, Pebble, selling about 400,000 units worldwide in the same year. The relative newcomer turned juggernaut here is Apple, whose Apple Watch tipped the scales at 1 million pre-orders before its release in May 2015.

For consumers, opting into wearable tech is a slow but steady process. Despite the fitness band market being an industry grossing $700 million per year, only one in five Americans owned a wearable device in 2014, and only 10 percent of those owners actually wear them, according to data collected by PricewaterhouseCoopers. The dawn of the smartwatch is speeding up growth, however, with experts predicting that the various iterations of the device will gobble up more than 70 percent of total market share by 2019.

If that trend holds true, according to Business Insider,…

Even as the adoption of wearable tech is on the rise with consumers, the types of devices they’re buying are in flux. Fitness bands, long the dominant niche in wearables, are seeing steady declines in sales during 2015.

According to Yahoo! Finance,

Researchers estimate steep regression of fitness band market share in wearables from 36 percent in 2014 to only 20 percent by 2019.

What’s behind the anticipated drop?

Nike, a player in the fitness band realm, is working closely with Apple on a partnership between its fitness software and the Apple Watch. The international sports clothing and apparel company shuttered its own fit wearable, Nike+ FuelBand, in 2014 to focus on its workout software. The maneuver is further evidence of Apple’s surging influence in the wearable space. Consumers may have an easier time seeing the utility in smartwatches than they do sliding on extra accessories to get benefits from wearables. In short, integration is the key.

Businesses are also looking into leveraging wearables, particularly Apple products, in 2015 and into the future. Multiple hospitals and emergency rooms are incorporating Apple Watches into health trials to measure hypertension among doctors and nurses, according to Medical & Marketing Media. Health companies hope to use these results to find ways to add the Apple Watch into home health plans to keep workers in top shape throughout their lives. Health app makers are also flocking to the new wearable technology, including WebMD, Doximity, and Lark, with offerings that help with elements from diagnosis to physician networking.

Medical care and fitness remain prominent areas of strength for wearables, even if fitness bands didn’t perform toward achieving ubiquitous use across wider markets. Whatever utility consumers find from these devices, research indicates where consumers like to use the gadgets from: the wrist. Statista notes that nine out of every 10 wearable devices shipped in 2015 are wrist-worn devices. Trend data and forecasting do not predict any other type of wearable device rocketing into prominence in the same way over the next five years, if ever.

Total shipments of wrist-worn wearable devices across the globe could rise higher than 126 million units per year.

Past Trends in Wearable Technology

Wearable technology didn’t always have the sleek interfaces and cross-device ecosystems that modern consumers consider standard features. During the 1980s, the greatest advancement in wearables that people could hope for was the digital calculator watch. Anything else outside that realm was the province of science fiction novels or Cold War spy thrillers — illegal to own or simply imaginary.

Through the 1990s and into the new millennium, cell phones transitioned into smartphones, which gave consumers new wearable headsets and Bluetooth technology to take the devices out of their hands and, mostly, put their wandering eyes back on the road. Trends in wearables centered around ways to augment devices already in existence. At this development stage, wearables didn’t have their own features beyond helping people free up their hands to focus on other tasks.

Companies regularly waffled on bringing new wearables to market for fear that consumer demand wouldn’t support the cost of introducing these new gadgets. One record-breaking crowdfunding campaign in 2012 turned that prevailing belief on its collective head.

Pebble was a startup with a handful of employees when it launched its Kickstarter campaign to crowdfund its prototype smartwatch. The company raised its first $1 million in 28 hours and later received more than $10 million in public donations, according to the Las Vegas Review-Journal, making it the third highest-earning Kickstarter campaign ever. Wearers instantly gravitated to the smartwatch’s customizable features, including downloadable watch faces and sports apps, and its compatibility with Android or iOS smartphones.

Pebble exposed both the need and the want in the market in a matter of hours, evaporating concern for many risk-averse tech companies in the process.

Why didn’t these businesses and their marketing departments see these advancements coming?

Millennials and those of Generation Y have a deep need for device integration into daily life and activities.

MobiHealthNews observes that millennials are twice as likely to own and use wearable tech than adults 35 years and older, and they are also more willing to adopt tech devices earlier than older generations. Marketers saw the need for greater agility in taking advantage of the emerging platform and its developing demographics.

In 2015, with adoption of wearable tech growing to around the same percentage as mobile tablet use was in 2012, roughly 21 percent, advertising is at its mass adoption tipping point for developing new strategies.

The message was simple: 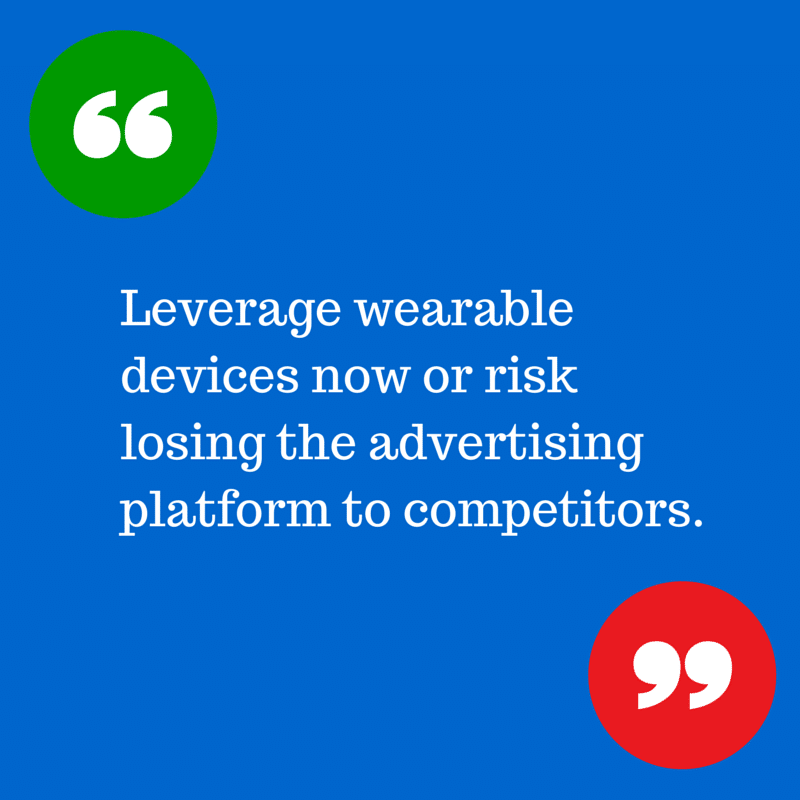 Device integration spurred by wearable tech may mean that smartphone owners won’t pull their devices out as often to check text messages and emails. This trend has vast implications for digital and traditional advertising channels across nearly all industries.

According to the Content Marketing Institute, marketers must make their messages more easily consumed or “glanceable” than ever before to keep their brands top of mind with wearable users.

How can advertisers trim more fat from their already streamlined campaigns?

How do they innovate to deliver compelling emotional experiences and content in almost an instant?

Certain channels are more conducive to this Internet marketing strategy than others, as the following points illustrate:

Experimentation remains vital to determining the most effective methods of advertisers on wearable devices. Marketers are going to need to develop new ways to measure engagement, show successes, and discover new opportunities. Some experts claim it’s only a matter of time before companies try to sell the user data, including browsing habits, location information, and activities performed, all gleaned from wearables.

Finding the signals that show potential buying actions from wearable data is important if businesses and marketers are going to leverage the platform to get more eyes on their products and services.

Marketers extracting data from wearables need to go beyond Internet browser history, click behavior, or apps used. These marketers may need to develop a kind of social clairvoyance in distilling down everyday human interactions to usable information. The challenge of determining not only user behaviors in location changes, but also activity patterns and state of mind, may play key roles in how marketers serve ads in the future.

Industries Most Impacted by Wearable Technology

Not every industry can leverage wearable technology for marketing, now or in the future, with the same effect. Some brand messages may not translate their emotional punch or call to action with the same degree of success in this new, glanceable world.

On the other side, industries need to jump on the wearable bandwagon quickly or remain at risk for losing their voices as competitors join the fray. The following are the industries best suited for advertising on wearables:

Since most tried and tested marketing techniques don’t work on wearables or have reduced effectiveness, limited data exists for companies having great success in the space. Users aren’t yet comfortable enough with the technology to give up usability for the sake of ad placement. In addition, consumers are more sensitive to older, intrusive models of advertising on wearables that worked so well on smartphone apps and online content viewing.

In short, consumers are not quite ready to filter through banner ads to get the content they want.

That attitude, however, hasn’t stopped some of the following companies from trying the intrusive method on wearable devices:

Medical companies have some of the greatest challenges in wearable technology because federal law protects the sensitive information their apps and devices collect from their customers. There’s simply no way, at least now, to sell data referring to user pulse, heart rates, medical history, or other health-related routines without violating the Health Insurance Portability and Accountability Act (HIPAA). Per the U.S. Department of Health & Human Services (HHS), willful violations can cost companies a minimum of $10,000 per infraction up to $250,000 per incident for repeat offenders.

Why Wearable Tech Is the Market’s Future

The potential impact across markets is far-reaching, with more consumers expecting their wearable devices to deliver useful information, including better search results to find restaurants, real-time foreign language translation, and coupons for redemption at the right time.

As adoption numbers rise, consumers will only increase their desire for devices that connect with their body, which means marketers need to develop their strategies and campaigns around this need for deep integration.

Other trends to consider include the following:

Thanks to wearable devices, by 2020, marketing to consumers will center mostly around their location and the type of signals received and interpreted by wearables while users wear the devices.

Imagine a marketing campaign that optimizes its spend by hour based on wearer habits. Don’t want to spend money on serving ads when users are asleep? No problem; adjust your campaign to turn off when wearables detect resting signals from their users.

If marketers want to craft successful content for the wearable space, they must continue to ask themselves what context and timing best fits their users or target audience. Imagine working in a world where ad targeting focuses more on customer mood — not anticipated emotion, but what they’re actually feeling — based on user data from wearable devices instead of traditional buying signals.

For example, integrated devices can work together to analyze traffic patterns for users, plot alternative routes in real-time, contact co-workers to let them know of delayed arrival times, and even schedule massage therapy sessions for later in the day to deal with mounting work stress in response to heart rate and pulse readings. Users won’t see the marketing involved in those steps because convenience acts as a filter for overt brand messages.

TAKEAWAY
The future of wearable technology is convenience marketing where agencies and businesses dispense with the clever turns of phrase in favor of helping their consumers get what they want at exactly the right moment that they need it.

Companies who choose to ignore the rising adoption trends with smartwatches and other items — including smart clothes, gloves, and augmented reality devices — are making a dangerous gamble with their voice and leadership in future markets.

Still not quite sure how to leverage wearable technology to grow your business? Let’s talk!

This site uses Akismet to reduce spam. Learn how your comment data is processed.